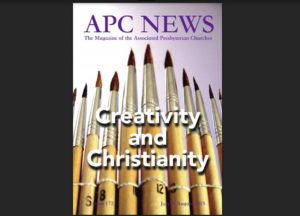 We invite you to explore the May/June 2015 issue of the APC News! 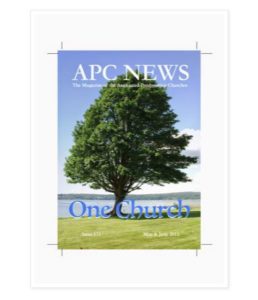 Our newest magazine has hit the newsstands (virtually speaking) and you can access it here! 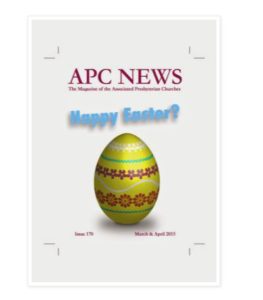 END_OF_DOCUMENT_TOKEN_TO_BE_REPLACED

At January’s Presbytery we welcomed some visitors from a couple of our congregations. David James from Oban and Stewart Wilson from the Stornoway congregation were welcomed to the Presbytery meeting along with the Stornoway locum minister Rev Michael Butterfield. We are increasingly aware of our limited resources and man power in these days and so it was good to have them with us and to receive their contributions to the various discussions.

The General Treasurer’s financial report highlighted the possibility of a deficit in the coming year and encouraged us all to think about our giving to the Lord’s work. This is necessary if we are to meet our obligations and if we are to provide effective ministry to our congregations.

Rev Wayne Pearce has left our Skye and Harris congregation as minister, along with Donald MacCuish who has resigned from the roll of assessor elder after serving the congregation over a long period. We are indebted to these men for their service in the Lord’s work and wish them well. This is a difficult time for any congregation to be without a minister and we must do everything that we can in such situations. At the last Presbytery the Rev Gordon Murray was appointed to work as Interim Moderator for the congregation and he is now joined by Rev Ross McFarlane. Together they team up with Alasdair Patterson on the Kirk Session. Please remember these men and the congregation of Skye and Harris at this time in prayer.

Other congregations are also greatly affected by a lack of man power and resources. We received a report of the work in Assynt from the Free Church Interim Moderator, Rev John Forbes. We have enjoyed a relationship with the Free Church in our Assynt congregations for long years now but even in this joint situation things are a struggle. It is increasingly hard to get pulpit supply to far flung areas and there is only one service now on the Lord’s Day at 3pm in Lochinver. Please pray for the Interim Moderators, Rev John Forbes and Rev John van Eyk, the folk there, and that the gospel would flourish there.

With Wayne’s departure there was also a vacancy on the Training Committee. The Rev Ross Macaskill agreed to become a member of this group along with Mr John Lister, Inverness. There was some discussion over the APC Conference which comes under the remit of this committee. The last conference was for various reasons very poorly attended. It looks like there will be no conference this year. The committee will look at the best way forward for the future. Various suggestions were made, such as: combining it with the General Assembly; having it at the end of the APC Youth Camp; whether to have a 3-day or just a 1-day conference; appealing to a broad group or keeping it more APC focussed. Perhaps you have some ideas that you would like to share about future conferences? If you do email the committee clerk: jcaferguson@hotmail.com.