You are here: Home1 / Congregations2 / Burdiehouse Southhouse Community Church | Edinburgh
Maps were disabled by the visitor on this site. Click to open the map in a new window. 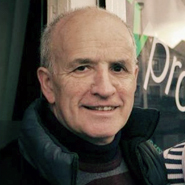 John Ross was born on the Black Isle and was too glad to leave school at age 15 to train as a letterpress printer. He had little or no intention of following Christ until recovering from surgery and realised that if he had not come through the operation he would have gone straight to hell. He was greatly helped by the preaching of Rev D. A. MacFarlane, Dingwall, who often highlighted indwelling sin in true believers. This understanding has helped him to the present day.

Believing God was calling him to the ministry he began to study, at Langside College in Glasgow then the University of Aberdeen and did his third and last year of the church course under Rev A. F. Mackay, Inverness. He was ordained and inducted to the Tain and Fearn congregation in 1988 and in 2004 came to Edinburgh to do an outreach work. He says it is a real privilege to have served in each of these places. Married to Morag for thirty nine years, they have two sons, three daughters and five grandchildren. His greatest enjoyment is God, and after that, family, friends, work, walking, golf on an “odd” occasion and he would love to do woodwork.